This is one of those “good news, bad news” sorts of things. The good news is that the number of craft breweries in the United States has hit a 125-year high,  and mega-breweries continue to lose market share. The bad new is the consumption of beer (and beer-like substances) is dropping. (see graph at bottom of post)

Still California is part of the boom, according to beerinsight.com; California “saw a full 43 openings recently: 27 microbreweries, 11 brewpubs and 5 contract breweries.” 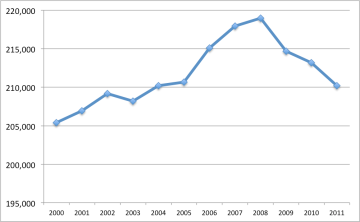