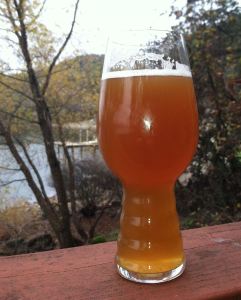 Not yet fully carbonated. This house pale ale is a nice blend of malt, hoppiness, and toastiness.

If your first pick for an ice cream flavor is vanilla, you may be a Pale Ale person. That vanilla ice cream tells you a lot about the other flavors that the maker has and how good they will be. Pale Ale, like vanilla, is the base for everything else in the lineup.

I always call for an American pale ale first. Why? Well, it’s a common style that every pub should have, and it allows for some creativity. But it also takes a little bit of finesse and is a good measure of the brewer’s skill. The same holds true with homebrewers; don’t tell me about all the oddball beers you can make. Show me first that you have your basic skills down. Give me an everyday American pale ale.

Making a drinkable and yet interesting American Pale Ale continues to be my quest. This last batch seems to be the grail. Good hop flavor with a touch of sweetness from the Caramel 60 malt and toastiness from the Victory malt.

The BJCP (Beer Judge Certification Program) says the flavor should be:

Usually a moderate to high hop flavor… Low to moderately high clean malt character supports the hop presentation, and may optionally show small amounts of specialty malt character (bready, toasty, biscuity)….Caramel flavors are usually restrained or absent. Fruity esters can be moderate to none. Moderate to high hop bitterness with a medium to dry finish. Hop flavor and bitterness often lingers into the finish. No diacetyl [burnt butter or butterscotch flavor].

This American Pale Ale recipe started out as the American Pale Ale recipe from “Brewing Classic Styles: 80 Winning Recipes Anyone Can Brew” by Jamil Zainasheff and John Palmer. It has been tweaked enough that it is now quite different. The latest tweak was to substitute Victory malt for the Vienna malt (which had replace Jamil’s Munich malt in the original recipe). The Sinamar in the recipe adds color without the flavor that would come from Chocolate malt or Midnight wheat.

This is a 10 gallon batch and the mash efficiency is at 82%. If your efficiency is higher or lower, you will need to adjust your amounts.

What flavors and aromas do you like in your American Pale Ale? 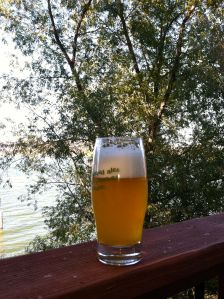 Accidental IPA. It was supposed to be an American Pale Ale.

When it was brewed two weeks ago, the Accidental IPA was supposed to be an American Pale Ale.  That is, until, due to better efficiency in extracting sugars, the specific gravity was overshot by 12 points and Accidental IPA became an India Pale Ale (American style– though at around 39 IBU it is low on bitterness). The beer was dry-hopped with 1 ounce each of Citra, Falconer’s Flight™, and Centennial hops.

This time, instead of bottling the batch, it was put into a 5 gallon keg and 3 keggettes (Tap-A-Drafts actually, if truth be told).

The beer is cloudy, perhaps due to the yeast not having dropped, or from the use of wheat, or the pickup tube pulling yeast in. Its color is about a 3 or 4 SRM (the color of straw,which is lighter than what the picture shows) and has a foamy white head. There is little lacing left on the glass after the beer is gone.

The beer’s aroma is subtle, a sweet combination of malt and citrus. As the beer warms a fruity character appears (probably from the Citra dry-hopping).

My impression is that the beer leans toward the bitter side but not jarringly so and tastes of citrus. The aftertaste is citrus also. There may be an off-note that I can’t quite wrap my tongue around, but then I could be overly critical.

It strikes me as a bit on the light side, though not unpleasantly so. The beer is well carbonated and tingles the tongue and adds to the bitterness.

This is a dangerous beer. It’s 7.5% ABV hides in the carbonation and citrus flavors and will definitely affect your ability to say no to another. It’s a drinkable beer with a good beat that many could dance to. I think it will be a hit at the Northern California Homebrewers Festival in September.

I know I used this picture last time. But, really, you need this book. (Cover via Amazon)

Yesterday, we here at Flog This Dead brewing, tried our hand again at an American pale ale (definition here). And, again, we made a 10 gallon batch of beer.

The recipe was the same as before and came from the book, “Brewing Classic Styles: 80 Winning Recipes Anyone Can Brew” by Jamil Zainasheff and John Palmer. (Really, if you don’t have this book in your library, you should.)

Two carboys were pitched with Fermentis’s Safale 05 yeast (I toyed with pitching one with Safale 04 but decided not to), and one carboy had Wyeast 3787 Trappist Ale yeast pitched into it. My son and my friend Paul are excited about the Belgian brew.

For the second time in a row, our American pale ale jumped into the India pale ale category (for two of the carboys–the Trappist will be Belgian-y), at least as far as alcoholic content is concerned.

Kelsey Creek Brewing Company opened its doors to the public for the first time on Saturday, July 14, 2012. Publican Ron Chips had a smile wider than Main Street in Kelseyville where Lake County’s newest public house is located. “It’s been a constant stream of folks since we opened the doors,” Chips said.

Ron Chips started as a home brewer and quickly turned pro by attending brewing school and interning at Lagunitas in Petaluma. The brewing company has been in the works for almost a year.

On tap for the opening was Kelsey Creek pale ale an American Pale Ale that was brewed with Ivanhoe hops grown in Clearlake as well, and No’na’me Irish Red ale.

Chips showcased one of the centerpieces of the brewery: a Russian made dispenser for filling half-gallon to-go bottles known as growlers. “The growler filler first flushes the bottle with CO2 to remove all oxygen, which is the enemy of fresh beer,” Chips said. “Then it fills the growler slowly so it does not foam. Last, there is a layer of Co2 at the very top. Most growlers can last only a few days without being opened, but mine can last for a month, making the beer fresher for a much longer of time,” he said, “I knew Kelsey Creek Brewery had to have it as soon as I saw it at a trade show.”

The brewery has an outdoor seating area (a beer garden), a long copper bar, and even purse hooks beneath the bar for women to hang their purses while they perch.

Update (7/21/12): Kelsey Creek Brewing has had to open on Mondays and Tuesdays due to the pent up demand for good and fresh beer in South Lake County. And, Ron now has a third ale on tap: a Scotch ale. 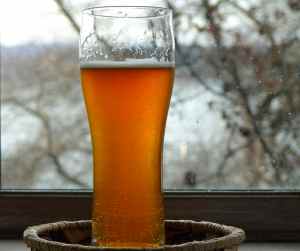 No doubt you’re not wondering what we here at Flog This Dead (Mule) Brewery decided to do with the “Oh Well, What The Hell?” pale ale after detecting  soapy and buttery tastes. The soapy flavor could be the result of the breakdown of the fatty acids that in the trub at the bottom of the fermenter (though ten days hardly seems too long to leave trub in the bottom) or a by-product of some yeasts. Butter flavors can result from diacetyl.

Once again we used the Beer Recipator’s Carbonation site to come up with the proper amount of sugar for the style of beer brewed. The style was  American pale ale.  American pale ales should have a volume of CO2 of 2.2-2.8. We split the middle and  went with 2.5. They recommended 4.53 ounces (128 g) of honey. We found a website that would convert weight of honey to volume of honey and the amount  calculated out to 3 fluid ounces. We siphoned the carboy into a priming bucket, added the 3 oz of honey, and bottled the stuff.

Now, with only moments to go before we have to serve this beer–which we have renamed after some dead guy and claimed that it’s based on a 1200 year-old recipe–at the [insert big time beer event here], we hope the honey will fool people into thinking the stuff tastes okay.

…And making a delicious hash of it.

A while back I found a clone recipe at Baderbrewing.com for a Dogfish Head Shelter Pale Ale. I decided that it was as close as I was getting to tasting the real thing, so I brewed it three weeks ago. Unfortunately, I didn’t have the Simco hops for the flavoring at turn-off of heat; I subbed 0.5 oz of warrior hops instead (since Morebeer.com didn’t have Simcoe–in the future I’ll try a 50/50 mix of chinook and Citra as a sub for Simcoe). I also first wort hopped (FWH) this batch. FWHing does not appear to make the beer more bitter than a 60-minute addition.

The Bader Brewing recipe calls for malt extract, but since I wanted to go all-grain, I subbed in 14 lbs of pale ale malt (using a 6.5 gallon outcome with 65% efficiency for the grain calculation). And, instead of using corn sugar for the bottle conditioning (carbonating the beer in the bottle), I tried a commercial method and used speise (unfermented wort). 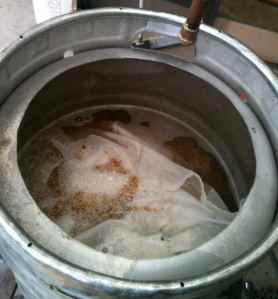 Collect approximately 6 gallons (27.3 L) of wort runoff. Add 0.5 oz of warrior hops to wort. Bring wort to boil for 60 minutes. Add yeast nutrient and whirfloc and wort-chiller (to sanitize) after 45 minutes of boiling.

Cool the wort to 75º F (24º C) and pitch English ale yeast. Aerate the wort. Cool to 64º F (20º C). Hold at that temperature until fermentation is complete. Bottle when final gravity has stabilized (around 1.014). Condition for 2 weeks, if you can wait that long. 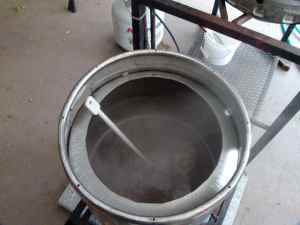 Wort (the unfermented raw beer) in the boil kettle. 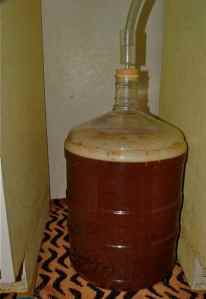 Beer fermenting in Better Bottle (TM) carboy. The 1/2″ blowoff tube drops into a bucket of water.