Yeast will build up some explosive pressure when they are well fed in a sealed container. I am still finding spots of yeast in nooks and tiny crevices around the kitchen.

Microscopic yeast are in the air all around us. They are the reason that we have beer, wine, and other alcoholic drinks.

Beer (and therefore yeast) lubricated the rise of civilization:

At some point in prehistory yeast fell into the gruel of one of our ancestors–after all, yeast is in the air around us. The gruel had been made from grain that had started to sprout (when seeds sprout an enzyme is released that breaks the starches stored in the seed into sugars the seedling will need for energy). Or perhaps the gruel tasted bad and our ancestor spit into the bowl (our saliva contains enzymes that break starch into sugars). The yeast started eating the available sugars. As they ate they produced ethanol (C2H5OH) and carbon dioxide (CO2). The next day, our ancestor would have noticed some froth on the top of the gruel, sipped it, and she (yes, she) found it didn’t cause problems. In fact, she felt better after drinking the frothy liquid.

“I have made an important discovery…that alcohol, taken in sufficient quantities, produces all the effects of intoxication.” — Oscar Wilde

Without yeast we would not have beer or civilization.

A couple of weeks ago my friend Ron (who runs Kelsey Creek Brewing) gave me a container of Irish ale yeast–a big container of yeast. So much yeast that I could have used it for 100 gallons of wort (rather than the 5 gallons I planned to make). I put the plastic container in the refrigerator for use in the following day’s brewing. Cold temperatures make yeast less active. But, even with the cold, they were active enough to produce a lot of CO2 gas.

The picture above shows the aftermath of my opening the plastic jar. I’m still finding yeast in places in our kitchen.

Fortunately for me, my wife loves the beer I make.

Here is some yeast (in a Better Bottle fermenter) eating sugars and producing CO2 and alcohol: 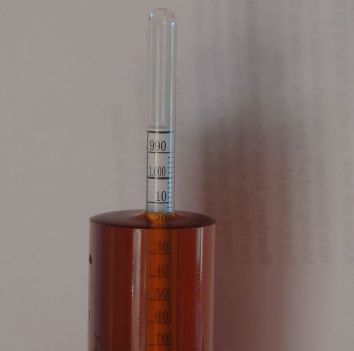 Oh Well, What the Hell a couple of weeks following bottle conditioning.

As you may recall (well probably not), on December 28 I brewed a beer that was supposed to be a Laurel India Pale Ale. Since the pre-boil specific gravity came in way too low for an India Pale Ale, I decided to make it a Pale Ale. Simple Pale Ales are not simple to make. There is no place to hide any imperfections. And, after 10 days in the fermenter, I tasted slight soapy and buttery flavors in the new beer. According to John Palmer’s “How to Brew” website, a soapy flavor can result from the breakdown of the fatty acids that are in the trub at the bottom of your fermenter. Butter flavors can result from diacetyl. To some extent a buttery flavor might not be bad. But it can also indicate that your yeast did not start on time.

Now, with only moments to go before we have to serve this beer–which we have renamed after some dead guy and claimed that it’s based on a 1200 year-old recipe involving wild honey and monk sweat–at the homebrewers portion of the semi-prestigious Battle of the Brews beer event. Let’s hope the honey will fool people into thinking the stuff tastes okay. 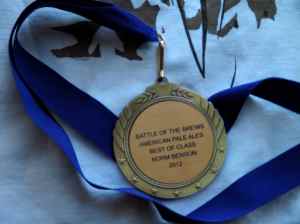 The Oh Well, What the Hell Pale Ale garnered 36 points at the Battle of the Brews in Santa Rosa, 2nd place had 35 points, and 3rd had 33.5 points. Woo hoo!

Yesterday, I went to MoreBeer‘s showroom in Concord, CA to pick up supplies plus ingredients for my next beer. I want to give a shout out to the good people there. Every experience I have had there has been positive and completely enjoyable and I must have gone there dozen of times now.

One of the cool things that MoreBeer does is offer feedback on homebrews (all of the homebrew stores I patronize do too). Most of the staff (maybe all the staff for all I know) are avid homebrewers and are passionate about beer.

So, I brought in Brew Disasters the “Oh Well, What the Hell” pale ale for an evaluation. The consensus, of the three fellow brewers who were in the showroom at the time, was that the flaws (if there were any) had been nicely masked by the honey. They would have liked a bigger hop presence, a little less carbonation (good thing I didn’t try for the top of the carbonation range–always a bit of a crap shoot when bottle conditioning and not force-carbonating in a keg), a little less alcohol “heat.” They agreed it needed to age a little longer to mellow it some more. All in all, they felt it was a serviceable pale ale.

My next beer project will be a pale ale, though since it will be brewed with Wyeast 2007, Pilsner Yeast, maybe it should be called a pale lager (let’s not get too hung up on designations, okay?). I bought 11 pounds of 2-row barley malt, 8 ounces of 60L crystal, and 2 oz of Amarillo hops and 2 oz of Cascade hops. I’m hoping to come up with a “house” pale ale with loads of flavor and aroma and not too bitter. I want a “Session” beer. To get that high flavor, low bitterness and keep the IBUs within Beer Judge Certification Program‘s (BJCP) Style Guidelines, the first hop addition will be 1 oz of Amarillo at 20 minutes rather than the standard 60 minutes before the end of the boil. The next hop additions will be 1 oz of Amarillo at 10 minutes, 1 oz of Cascade at 5 minutes, and lastly 1 oz of Cascade at 1 minute before the end of the boil. According to the BeerAlchemy software I use, this hop addition schedule should give the beer about 40 IBUs.

Keep your fingers crossed, this pale ale, erm pale lager, will be brewed this coming Saturday.

No doubt you’re not wondering what we here at Flog This Dead (Mule) Brewery decided to do with the “Oh Well, What The Hell?” pale ale after detecting  soapy and buttery tastes. The soapy flavor could be the result of the breakdown of the fatty acids that in the trub at the bottom of the fermenter (though ten days hardly seems too long to leave trub in the bottom) or a by-product of some yeasts. Butter flavors can result from diacetyl.

Once again we used the Beer Recipator’s Carbonation site to come up with the proper amount of sugar for the style of beer brewed. The style was  American pale ale.  American pale ales should have a volume of CO2 of 2.2-2.8. We split the middle and  went with 2.5. They recommended 4.53 ounces (128 g) of honey. We found a website that would convert weight of honey to volume of honey and the amount  calculated out to 3 fluid ounces. We siphoned the carboy into a priming bucket, added the 3 oz of honey, and bottled the stuff.

Now, with only moments to go before we have to serve this beer–which we have renamed after some dead guy and claimed that it’s based on a 1200 year-old recipe–at the [insert big time beer event here], we hope the honey will fool people into thinking the stuff tastes okay.