Last time on Brew Disasters (from now on to be referred to as BrewZasters), we had sampled our clone of Lagunitas Brewing’s Little Sumpin’ Sumpin’ Ale and detected  hints of clove (phenolics) and banana (isoamyl acetate) in the aroma and taste.

And we here at Flog This Dead Brewery wondered  if, given these possible imperfections, should we throw the whole batch down the drain, as Dogfish Head Brewing did in nearly every episode of Brew Masters? Hell no! Was our answer. We dry-hopped the bejeezus out of it with  2.33 oz   of  Cascade 1.0 oz of Simcoe, 0.53 oz of Columbus (Tomahawk), 0.45 oz of Perle, and 0.15 oz of Nugget–if a hop was in stock it went into the carboy. And, we hoped time would do its magic and remove the off-flavors.

Tasting Notes – NOT cloned – but not bad

After another two weeks in the secondary, the beer is not a clone but it tastes pretty darn awesome. The hops jump out of the glass and hit your nose like a wave of citrus and pine. It’s light in color (about 5 SRM). When you sip the hops hit your tongue first and it finishes with a bright citrus flavor with some pine in the background.

For bottling, we added 4 ounces of corn sugar and put the beer in our three Tap-a-Draft bottles. Tap-a-Drafts are a compromise between bottles and kegs. It’s nice filling only three bottles rather than 52 12-ounce bottles. A 16 ounce CO2 cartridge charges up the system and carbonates it. The handle has an issue. If you do not confirm that the handle is secure and the locking tab is in place, it leaks. This is what happened: I missed making sure the handle was completely secured and put it in the refrigerator. About 15 minutes later the beer had found its way into vegetable crisper (onions, celery, and lettuce were marinating in beer), behind and under the crisper, and onto the kitchen floor. Not quite as large a mess as the time the glue from labeler in Dogfish Head Brewing spilled all over, but a mess it was. And, we lost one-third of our product, or about $10 retail. Damn.

Sam Calagione has much higher standards than we do. His company has flavor profiles and everything. Whereas our motto is “When in doubt, hop the bejeezus out of  it.”

Last time on Brew Disasters we were trying to clone Lagunitas Brewing’s Little Sumpin’ Sumpin’ Al eand had several problems right out of the gate: Instead of a desired mash temp of 150F, the mash temp was 170F! And, the pre-boil specific gravity came in low at 1.043. That was a full 12 points below the 1.055 that was our target.

Well, it’s difficult for us to tell if the cooling of the grain from 170F to 149.5F succeeded. But, the adding of 0.5 pounds of corn sugar and 0.5 pounds of dry malt extract may have created another problem: phenols and esters. Specifically the addition of corn sugar could be the culprit for why there are hints of clove (phenolics) and banana (isoamyl acetate) in the aroma and taste. John Palmer says in How to Brew, that adding sucrose or refined sugar (corn sugar probably meets that criterion) contributes to ester production. The easily digestible sugar could have revved the English yeast (Fermentis’s Safale 04) and they could have been over-stimulated and giving off unwanted phenols and esters.

Given these modest, though real, imperfections, would we throw the whole batch down the drain, as Dogfish Head Brewing did in nearly every episode of Brew Masters?

Sam Calagione has much higher standards than we do. His company has flavor profiles and everything. Whereas our motto is "When in doubt, hop the bejeezus out of it."

So, since we have incredibly low standards (after all, we answer to no one but ourselves) and we have won a gold medal for a previous screw-up, we crossed our fingers and dry-hopped the holy bejeezus out of it with 2.33 oz of cascade hops, 1 oz of simcoe hops, and 0.5 oz of Columbus hops.

Funny I should mention that I cloned a Lagunitas brew just yesterday.

Lagunitas Brewing Owner, Tony Magee announced in a series of ‘tweets’ on Twitter that Lagunitas will opening a 250 barrel brewhouse in Chicago. He expects “1st mash-in will b Q4 2013. Freakin cool, this. Lots and lotsa work ahead.” 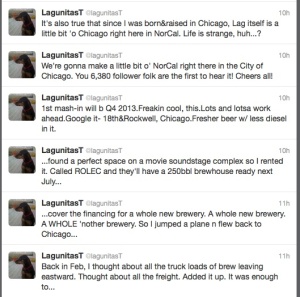 Announcing a new 250 bbl brewery140 characters (or less) at a time.

The brewhouse’s location will be “18th & Rockwell, Chicago” and bigger than most of the craft breweries in Chicago combined. At 250 barrels, it will be 5x the size of Goose Island’s operation in Chi town.

He expects “Fresher beer w/ less diesel in it.” Note: a pictorial of the brewing process is toward the end of this post.

We here at Flog-This-Dead Brewing are excited to try brewing a new (to us anyway) beer: Lagunitas Brewing’s Little Sumpin’ Sumpin’ Ale. The grain bill is 16 pounds; a 50/50 blend of wheat and barley. The beer has minimal brewing hops and, true to the Lagunita’s way, massive dry hopping, 4.5 ounces for a 5 gallon batch.

A huge thank you to the Jamil Zainasheff and Mike “Tasty” McDole of the Brewing Network‘s Can You Brew It and Lagunitas Brewing Company for sharing their Little Sumpin’ Sumpin’ Ale recipe with them. And, lastly, thanks to my buddy Paul for pointing me to the recipe and my loving wife for helping at just the right times.

As you may recall, we here at Flog-This-Dead Brewing just supplemented our temperature monitoring from a handheld Taylor 9842 Commercial Waterproof Digital Thermometer to a BrewMometer by Blichmann Engineering. So we started the strike water temperature for our mash at 20F above our desired mash temp, because we had found that after adding our grain the water cooled 20F. Apparently, having a thermometer probe further down makes a big difference and the mash temperature did not drop the 20F expected. Yikes, instead of a desired mash temp of 150, the mash temp was 170F! We yanked the bag of grain out of the mash tun and began cooling the watery wort down.

After cooling the mash conversion process started at a temperature of 149.5 and after 60 minutes finished at 137F. A batch sparge was used and the total wort produced was 10.5 gallons with a pre-boil specific gravity of 1.043 (1.033 @ 117F); a full 12 points below the 1.055 that was the target, the addition gallon produced had a lot to do with that (You would think I could subtract 9 from the yield of the first runnings, but no, I muffed it). One-half pound of corn sugar and one-half pound of dry malt extract were added to boost the specific gravity.

It took over about an hour and a half to get the wort to boiling for the 90 minute boil.

Total time for brewing day (including cleanup–that’s why it’s a hobby and not a business): 12 hours.

Output of ~10.5 gallons of wort from the mash. How on earth did I batch sparge 1.5 gallons too much? Subtract the desired amount (9 gallons) from the first runnings and that’s the amount of hot liquor (aka hot water) to put in for the second.

A piece of metal is placed below the thermometer to shield it from convective heat.

Wort beginning to boil. The foam in the kettle contains proteins (?) that many say to skim. I skim the foam.

BrewPal app has a nice brewing timer. Enter your recipe into BrewPal and it reminds you when to add hops, other additions such as Irish moss, and the wort chiller.

The Flog This Dead Brewing‘s recipe: