This is one of those “good news, bad news” sorts of things. The good news is that the number of craft breweries in the United States has hit a 125-year high,  and mega-breweries continue to lose market share. The bad new is the consumption of beer (and beer-like substances) is dropping. (see graph at bottom of post)

Still California is part of the boom, according to beerinsight.com; California “saw a full 43 openings recently: 27 microbreweries, 11 brewpubs and 5 contract breweries.”

The inventory of hops held by growers dealers, and brewers on March 1, 2012, totaled 117 million pounds which is 3 percent less than the USDA‘s revised March 1. 2011 estimate. Still, this is the second highest level for March 1 hop stocks ever recorded. The previous record of 121 million pounds was set on March 1, 2011. 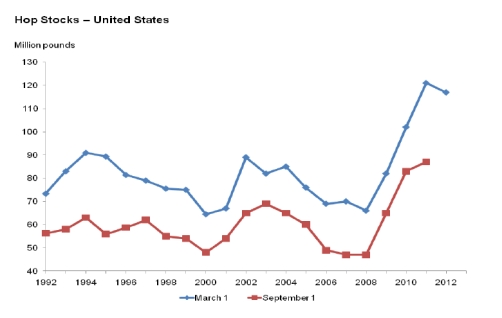 March 2012 hop stocks are down 3% from 2011’s numbers but still very high compared to years previous.

The United States Department of Agriculture‘s National Agricultural Statistics Service reports on hops can be found at http://www.nass.usda.gov/Statistics_by_State/Washington/Publications/Hops/index.asp

According to said Paul Gatza, director of the Brewers Association, “In the last 15 years, craft brewing has gone from one percent of the overall beer market to almost six percent in 2011.”

The Association’s full 2011 industry analysis, which shows regional trends and sales by individual breweries, will be published in the May/June issue of The New Brewer, available May 22, 2012.

¹The definition of a craft brewer as stated by the Brewers Association: An American craft brewer is small, independent, and traditional. Small: Annual production of beer less than 6 million barrels. Beer production is attributed to a brewer according to the rules of alternating proprietorships. Flavored malt beverages are not considered beer for purposes of this definition. Independent: Less than 25% of the craft brewery is owned or controlled (or equivalent economic interest) by an alcoholic beverage industry member who is not themselves a craft brewer. Traditional: A brewer who has either an all malt flagship (the beer which represents the greatest volume among that brewer’s brands) or has at least 50% of its volume in either all malt beers or in beers which use adjuncts to enhance rather than lighten flavor.

²Flavored malt beverages are not considered beer for the Top 50 rankings.

Contact:
Abby Berman (on behalf of the Brewers Association)
abby@rosengrouppr.com
646.695.7044

The Brewers Association is the not-for-profit trade association dedicated to small and independent American brewers, their craft beers and the community of brewing enthusiasts. The Brewers Association (BA) represents more than 70 percent of the brewing industry, and its members make more than 99 percent of the beer brewed in the U.S. The BA organizes events including the World Beer Cup®, Great American Beer Festival®, Craft Brewers Conference and BrewExpo America®, SAVOR℠: An American Craft Beer & Food Experience and American Craft Beer Week. The BA publishes The New Brewer magazine and its Brewers Publications division is the largest publisher of contemporary and relevant brewing literature for today’s craft brewers and homebrewers.

Beer lovers are invited to learn more about the dynamic world of craft beer at CraftBeer.com and about homebrewing via the BA’s American Homebrewers Association. Follow us on Twitter.