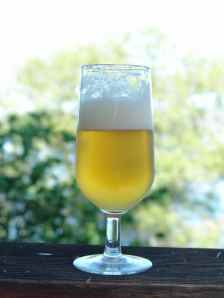 Last time on Brew Disasters (from now on to be referred to as BrewZasters), we had sampled our clone of Lagunitas Brewing’s Little Sumpin’ Sumpin’ Ale and detected  hints of clove (phenolics) and banana (isoamyl acetate) in the aroma and taste.

And we here at Flog This Dead Brewery wondered  if, given these possible imperfections, should we throw the whole batch down the drain, as Dogfish Head Brewing did in nearly every episode of Brew Masters? Hell no! Was our answer. We dry-hopped the bejeezus out of it with  2.33 oz   of  Cascade 1.0 oz of Simcoe, 0.53 oz of Columbus (Tomahawk), 0.45 oz of Perle, and 0.15 oz of Nugget–if a hop was in stock it went into the carboy. And, we hoped time would do its magic and remove the off-flavors.

Tasting Notes – NOT cloned – but not bad

After another two weeks in the secondary, the beer is not a clone but it tastes pretty darn awesome. The hops jump out of the glass and hit your nose like a wave of citrus and pine. It’s light in color (about 5 SRM). When you sip the hops hit your tongue first and it finishes with a bright citrus flavor with some pine in the background.

For bottling, we added 4 ounces of corn sugar and put the beer in our three Tap-a-Draft bottles. Tap-a-Drafts are a compromise between bottles and kegs. It’s nice filling only three bottles rather than 52 12-ounce bottles. A 16 ounce CO2 cartridge charges up the system and carbonates it. The handle has an issue. If you do not confirm that the handle is secure and the locking tab is in place, it leaks. This is what happened: I missed making sure the handle was completely secured and put it in the refrigerator. About 15 minutes later the beer had found its way into vegetable crisper (onions, celery, and lettuce were marinating in beer), behind and under the crisper, and onto the kitchen floor. Not quite as large a mess as the time the glue from labeler in Dogfish Head Brewing spilled all over, but a mess it was. And, we lost one-third of our product, or about $10 retail. Damn.

Sam Calagione has much higher standards than we do. His company has flavor profiles and everything. Whereas our motto is “When in doubt, hop the bejeezus out of  it.”